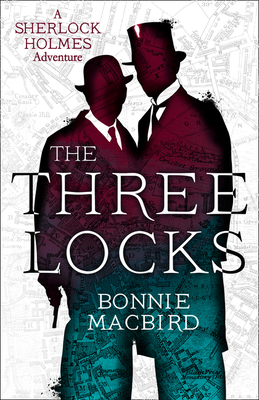 This is book number 4 in the Sherlock Holmes Adventure series.

A heatwave melts London as Holmes and Watson are called to action in this new Sherlock Holmes adventure by Bonnie MacBird, author of "one of the best Sherlock Holmes novels of recent memory."

In Whitechapel, a renowned Italian escape artist dies spectacularly on stage during a performance - immolated in a gleaming copper cauldron of his wife's design. In Cambridge, the runaway daughter of a famous don drowns, her long blonde hair tangled in the Jesus Lock on the River Cam. And in Baker Street, a malevolent locksmith exacts an unusual price to open a small silver box sent to Watson.

From the glow of the London stage to the buzzing Cavendish Laboratory in Cambridge, where physicists explore the edges of new science of electricity, Holmes and Watson race between the two cities to solve the murders, encountering prevaricating prestidigitators, philandering physicists and murderous mentalists, all the while unlocking secrets which may be best left undisclosed. And one, in particular, lands very close to home.

Bonnie MacBird is passionate about Victorian London and Sherlock Holmes. She lives in an 1890 building right off Baker Street, and fell in love with Holmes as a schoolgirl in her native California. After many years in the entertainment industry as a film executive, Emmy winning producer and screenwriter, she now writes the critically acclaimed Sherlock Holmes Adventure Series for HarperCollins, bringing the much loved detective back, traditional style, in full-length adventures. Meticulous research, a flair for deductions and a decided sense of humour have turned these into fan favourites. ART IN THE BLOOD was translated into nineteen languages and was followed by UNQUIET SPIRITS and THE DEVIL'S DUE.